According to a study carried out by the economic consultancy Deloitte, Study on smartphone use, 31 percent of users complain of a compulsion to constantly look at their smartphone. According to Deloitte, the smartphone is more and more a curse and a blessing. The proportion of consumers who are critical of the extent of their smartphone use has increased significantly. And increasingly, negative side effects are being perceived, from lack of concentration to late falling asleep to headaches. So it is quite possible that smartphone consumption will soon reach its limits. For the study, Deloitte surveyed more than 2000 users in Germany alone. 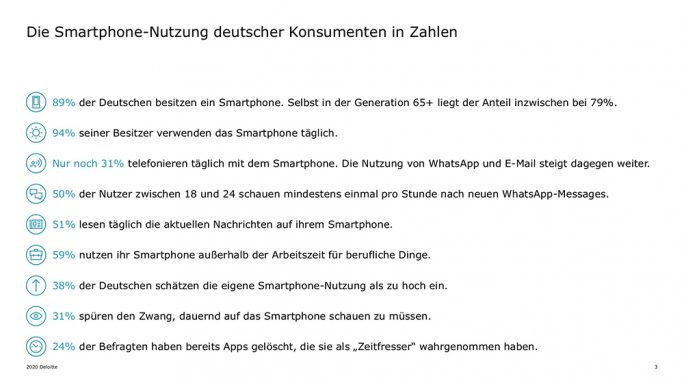 “We live in the age of smartphones, no other technical device has changed our everyday life so much in the 21st century,” explains Dr. Andreas Gentner, Partner and Head of Technology, Media & Telecommunications EMEA at Deloitte. “In the current edition of the Deloitte Mobile Consumer Survey, we found that smartphone distribution has now reached a certain saturation limit, but the intensity of use has continued to increase. This is mainly due to the numerous functional possibilities. More and more can be done with a smartphone.” 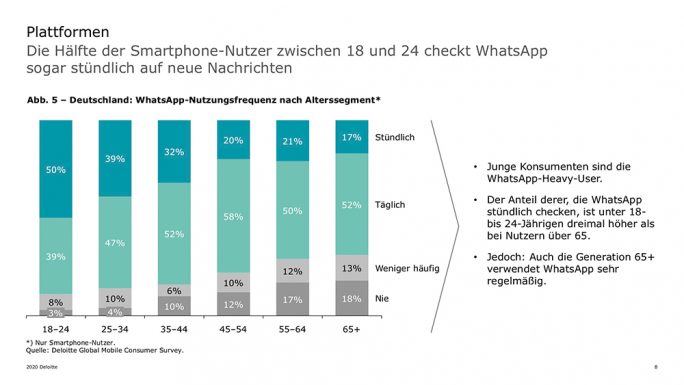 Three reasons for intensive use: communication, work and entertainment

Communication is increasingly taking place via smartphone. In particular, the use of mail and messaging services has increased significantly since 2017. Sixty-nine percent of respondents communicate daily via mobile instant messaging services (MIM), an increase of 13 percent compared to 2017. WhatsApp is the most popular messenger. 28 percent of users even check every hour to see if they have new news. Even though the young target group between the ages of 18 and 24 uses Messenger particularly intensively – 51 percent check the app for updates every hour – the popularity of WhatsApp extends through all age groups.

The second most popular communication channel after the MIM services is still the e-mail. Fifty-one percent of respondents write or read their emails on their smartphones every day, an increase of 19 percent since 2017. The decline in traditional voice telephony and SMS, on the other hand, is more moderate than in previous years. In total, smartphone owners now spend more time with their devices – and that doesn’t apply to communications. 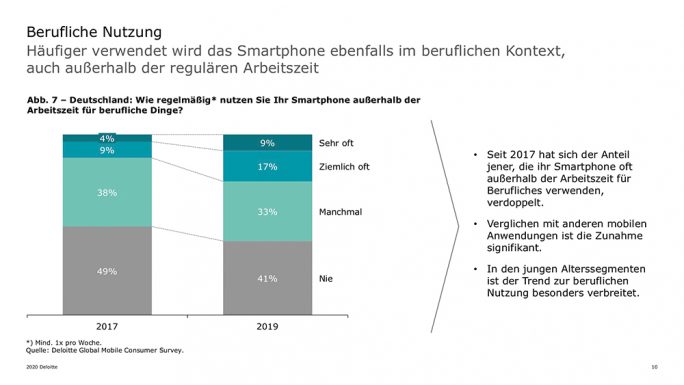 In the job, smartphones replace the classic landline phones

The proportion of respondents who often use their smartphone outside their working hours for work has doubled to 59 percent. This trend is particularly strong in the younger age groups. In addition, the smartphone is increasingly replacing the classic landline telephone in a professional context, with 40 percent of respondents saying they are making professional calls with their smartphones – an increase of 13 percent since 2017.

But the smartphone has also gained in importance in leisure activities. “The combination of smartphones and streaming makes entertainment more mobile than ever before,” explains Dr. Andreas Gentner. “The significant growth in games, music, TV and videos shows that consumers are adopting these mobile entertainment offerings. The boom in content streaming is also fueled by mobile use via smartphone.”

17 percent complain of physical symptoms due to high smartphone use

So smartphone owners are spending more and more time with their devices, and many people increasingly see this as a burden. Thirty-eight percent of respondents consider their own smartphone use to be too high. Among 18- to 24-year-olds, as many as 63 percent think they spend too much time on their smartphones. Thirty-one percent of all study participants say they are forced to look at their smartphones all the time, and 17 percent even complain of physical symptoms such as headaches or eye problems. 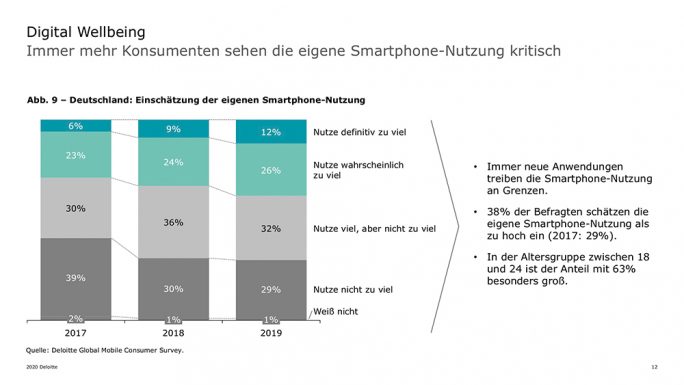 “The smartphone increases the speed of everyday life and sometimes also leads to unintended effects on the daily routine, such as answering work emails in leisure time,” says Dr. Andreas Gentner. “This also makes the smartphone a stress factor for people. Our survey shows that just under a quarter of respondents have already found an effective way to spend less time on their smartphones: 24 percent have already deleted apps that they perceived as time-eaters.”

release date, price and fact sheet, everything you need to know

Bring your fair to your customers!

Unc0ver unlocks all iPhones until 11 and iOS 13.5, what you need to know

Sony Xperia 1 II: Sony’s Super Flagship is getting the money

What Is Kolkata Fatafat Game?

Sport Shayaan Khan - August 11, 2020 0
Kolkata FF result – Fatafat result As we all of aware with matka game. Like this game Kolkata FF is also played in West Bengal. More than 5 million people play the game and earn a good amount of money. People of West Bengal knows very well about this game. Here we will discuss about this game […]

World Emily James - May 26, 2020 0
Activists Nathan Law reiterated "The Miracles" of Hong Kong Proteinans created in the past, but they could hardly stop the law of security. After...